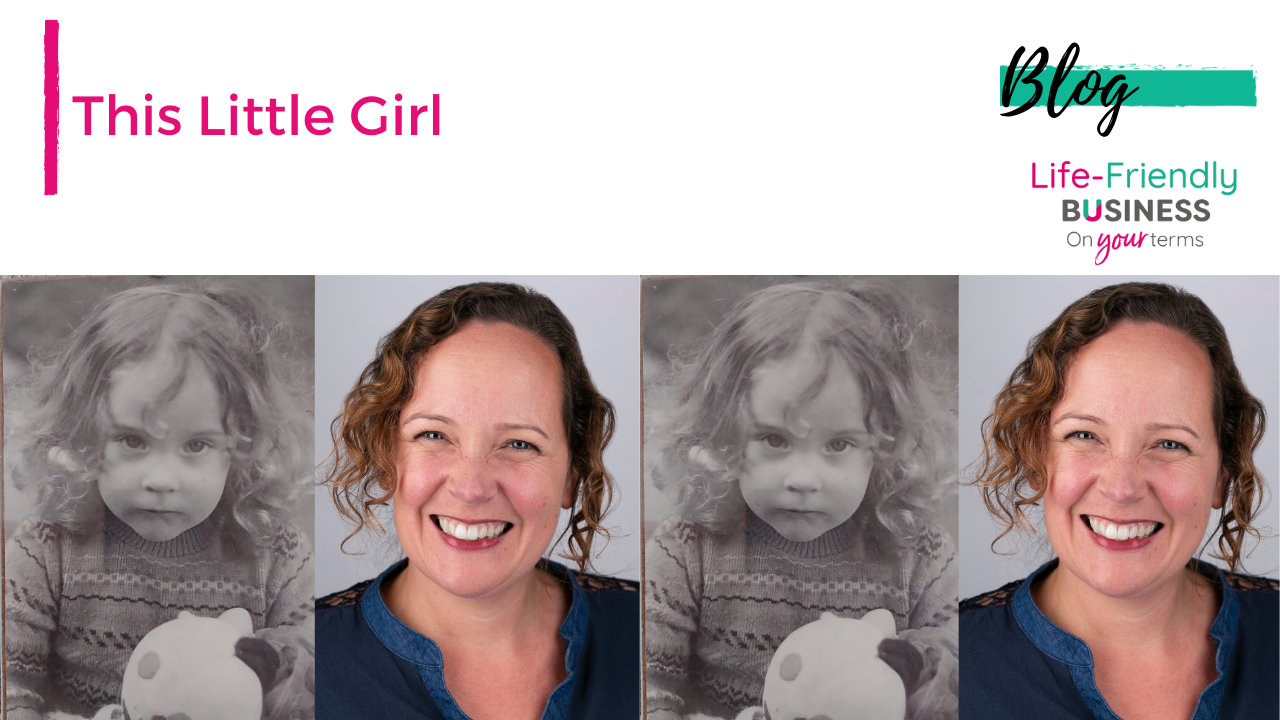 This little girl was determined to control her own world.

Her parents divorced when she was about 4. Her father, a manic depressive, did not feature in her upbringing. Instead she and her sister were raised by their mother, a strong, independent, intelligent woman.

Her mum worked several jobs to keep the family afloat, and went to university as a mature student at 34, soon becoming a published author (whilst raising two children single handedly). They never went hungry and never remember going without anything they needed.

This little girl was labelled a 'worrier' (now we would call it anxious) and often felt her feelings were dismissed because of it. This often made her feel small.

She was desperate to be liked. She hated being on her own and much preferred being surrounded by people. She lit up in social situations and never feared speaking to strangers.

She knew she wanted to work in the media and from the age of 8 would spend hours in her bedroom making radio shows, using two cassette players and scripting the weather and the news updates (one of the rare times she was happy being alone).

From the age of 13 she started doing free work experience at local radio and TV stations, sometimes starting at 5am on weekends after a long week at school.

She worked hard at her A Levels but was shocked when the results weren't as high as she'd expected. This meant she didn't get in to the university she wanted to. Devastating at the time, but in hindsight she ended up in the right place for her, made great friends and found her future husband.

Upon graduation, because of her wealth of work experience, she stepped straight in to a paid job at The BBC. She then moved to an independent TV company, RDF, which became her family, working on programs like Celebrity Wifeswap, Holiday Showdown and Ian Wright's Unfit Kids.

She doubted herself constantly though, and as a Production Manager found herself often consumed in the politics of budgets and health & safety rather than taking opportunities to be creative.

She got married and when she fell pregnant at 29 she started to question whether this would give her the work/life balance she desired. She wanted to be able to pick her children up from the school gates, and be present after school. She felt incredibly fortunate that she would be able to do that, as her own mother was not afforded that luxury.

So she started exploring other options. And after a traumatic birth and coping with exhaustion and depression after her first son, she made the decision to leave TV and start her own business.

It was a steep learning curve, she battled with imposter syndrome and made mistakes, but she also found allies, built a community around herself and finally learned to be confident in her own abilities.

Since then she has thrived. She has found her passion and her purpose. She has designed a life and business on her own terms, and now helps 1000s of other women to do the same.

This little girl finally managed to control her own world and now she's created her very own radio show (well, podcast) too!

This little girl is me.

Why am I telling you this? Because 70% of girls feel more confident about their future after hearing from women role models. I encourage you to take part in this campaign and share your story. Please tag me when you do @lifefriendlybiz as I would love to see it.